Through this fellowship, they will explore how Indigenous data governance principles such as OCAP® (ownership, control, access and possession) can help guide appropriate ways to share syilx heritage beyond Westbank First Nation, while simultaneously reaffirming community ownership and possession of digital heritage. This is one way to minimize the potential for misuse of syilx knowledge.

Digital images, videos and audio recordings, once shared online, can be copied, edited, re-used, remixed, and re-posted multiple times. Remixing and re-posting short videos with addictive tunes is the basis for viral dance challenges like Blanco Brown’s ‘The Git Up’ which has amassed over 70 million views on YouTube, or the Weeknd’s ‘Blinding Lights’ on TikTok, the popular social networking service, for example. It is fun to do and entertaining to watch, but digital media can be manipulated to deceive and mislead everyday viewers like you and me. This has has been highlighted in videos of Nancy Pelosi, Speaker of the House of Representatives in the US, where recordings were deliberately slowed down and altered to give viewers the impression that the House Speaker is drunk. Once digital media such as images and audio and video recordings are made available on the internet, anyone can alter them and re-post these alterations.

Now imagine if segments of a video recording of a syilx knowledge keeper were deliberately altered, taking her words out of context and changing their meaning, and then this misleading video was shared on the internet. Who has the authority to speak to that digital object’s originality, to verify it and to challenge subsequent alterations and transformations?

This issue is at the heart of the present project. As a result of colonialism and continuing colonial practices, vast amounts of information on Indigenous history and cultural heritage that belongs to First Nations, Métis and Inuit are held in Canadian provincial and federal institutions and museums across the world. Through this project, Westbank First Nation can showcase syilx digital heritage and understandings of syilx history and culture on its own terms. In so doing, the project re-centers Indigenous ways of knowing and syilx narratives, which in turn, challenge colonial views of the syilx people and their past. These efforts, in turn, can support the Province of British Columbia’s commitment to the United Nations Declaration on the Rights of Indigenous Peoples. The United Nations declaration reaffirms the rights of Indigenous peoples to manage their heritage.

To that end, we will create an interactive Web map that reflects Indigenous digital heritage governance and promotes understandings of syilx history, culture and heritage. Specifically, we will bring together digital heritage items, cultural protocol and mobile-friendly map tools (Figure 1). 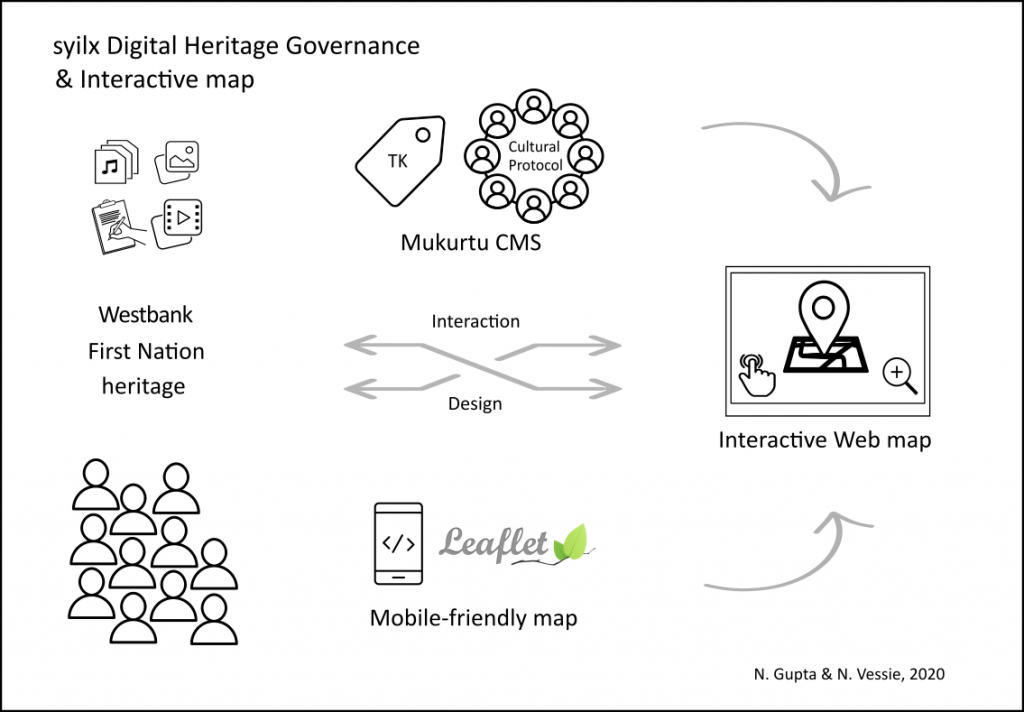 In Phase 1, we are working with digital heritage items such as images, audio and video recordings that the Archaeology Office has determined safe for sharing with general members of the public. We will attach cultural protocol to individual digital heritage items, in the form of Traditional Knowledge (TK) labels. Drs. Jane Anderson and Kim Christen developed the labels as an “educative and non-legal intervention” for Indigenous cultural heritage materials that are in circulation, such as those in public domain.

In our next blog post, we will discuss our progress and the different digital tools we are using in the project.

“Arrow” by David Alexander Slaager from the Noun Project

“arrows” by sasicreatives from the Noun Project

“audio file” by Justin Blake from the Noun Project

“Movie by Milky” – Digital innovation from the Noun Project

“people” by Humantech from the Noun Project

“Planting Plant” by Gan Khoon Lay from the Noun Project

“Tag” by parkjisun from the Noun Project

“write” by Ana María Lora Macias from the Noun Project